Celebrating 241 Years of Servant Leadership on the Army’s Birthday 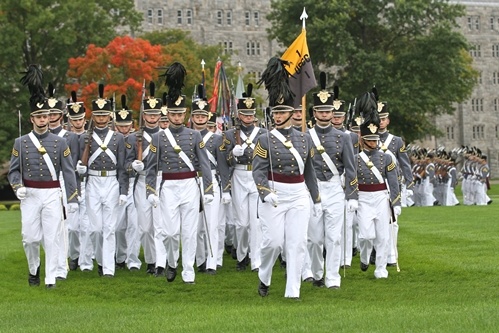 What do best-selling, contemporary authors Jim Collins, Simon Sinek, and Adam Grant have in common? Each shares servant leadership lessons they learned from the U.S. military.

To all the men and women who served in the military, past and present, today is the 241st anniversary of the Army’s birthday, also Flag Day.

To celebrate our service, I wanted to share several recent accolades from leadership articles that you and your colleagues have been receiving from these famous authors.

Jim Collins — Good to Great and Built to Last


In “What Soldiers Have to Teach Entrepreneurs,” Tim Askew shared the following from a Jim Collins keynote speech.

Jim was just coming off two years of teaching leadership at West Point. However, he reports he was the one taught leadership by his students. He recounted noticing several important things about his cadets. One, despite their overwhelming workload in a highly competitive environment, they went out of their way to support each other as colleagues. And they seemed much happier than students with more cosseted, free-wheeling lives that Collins had observed in elite civilian universities like Stanford, where he had taught for seven years.

“Collins also reported qualities deeply imbued in the West Point cadets that make for their success as leaders.” One key reason was “service to a cause greater than themselves.”

In closing, Askew offered the following:

…let me suggest that business schools, who claim to teach entrepreneurship, ethics, and leadership (they emphatically do not and cannot), might well profit from Collins’… deep understanding of the modern military’s … leadership model.

Simon Sinek — Start with Why and Leaders Eat Last


In Inc.Video How to Build a Company That People Want to Work For, Simon Sinek, backs up Askew’s claim:

When (leadership) is taught, it’s not taught well. Most MBA programs don’t teach leadership. They call it leadership, but they teach management.

Sinek asserts that leadership requires a sophisticated change in mindset, centered on taking care of another human being. This is something every military leader understands; it is part of our culture (See Command Responsibility).

Other arguments Sinek makes that support the military model of leadership development include:

Leadership is about creating an environment where employees feel safe. The idea for his latest book, Leader’s Eat Last,comes from the example military officers demonstrate at mealtime, especially in a field environment.

Adam Grant — Give and Take and The Originals


In Where Great Leaders Earn Their Stripes, Adam Grant, states:

When we think about where esteemed leaders earned their undergraduate educations, our minds naturally turn to the hallowed halls of Harvard and Yale. But there’s another training ground that may be equally valuable. It’s where Fred Smith, the founder and CEO of Federal Express, and Sam Walton, the founder of Wal-Mart, learned to lead — as did the current CEOs of Verizon and Johnson & Johnson.

They’re all veterans of the U.S. military.

Another study demonstrated that military experience was a better predictor of leadership in tough times, while it did worse when industries were thriving. Grant concludes:

I’d be willing to surrender a bit of innovation to prevent fraud. After all, it’s easier to teach innovation — or hire creative people — than it is to teach honesty.

Grant leaves his readers with a final observation:

For the past few years, I’ve asked my Wharton MBA students to name the single most impressive of their 800+ classmates. Although less than 10% of the class has military experience, in each year, the overwhelming winner has been a military veteran — a Navy SEAL, an Army helicopter pilot, an Air Force sergeant, and a Navy nuclear submarine engineer.

The military attracts people who are taught that leadership is more about giving credit, and accepting blame.  People who want to serve others and want to support a cause.

It’s an honor to be a part of this culture in all of the Services. So, Happy Army Birthday to my brothers- and sisters-in-arms!

Great opportunities attract people who want to support a cause.

In my May 2016 book, Unleash Your Values, I offer an inside look into a number of military leadership development examples that Collins, Sinek, and Grant address.

For a book preview, download Chapter 1: Define and Align, a discussion on the importance of aligning personal and professional values. It’s free!